A TOUCH OF MAGIC! 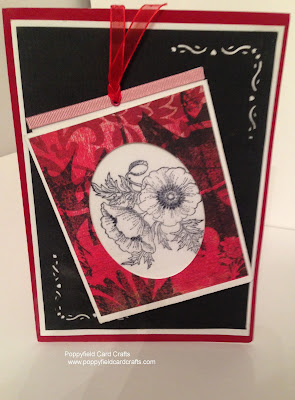 An A5  deep red base card with a smaller white panel then a black panel.  I used a punch for the pattern on opposite sides of the black card

On a piece of white cardstock I stamped the poppy image and coloured it using ProMarkers.  I also added a little sparkle too

Then, on a piece of acetate I stamped the same image and adhered it to the coloured design, ensuring it was aligned correctly and trimmed the excess acetate

I added a piece of ribbon to the top so the adhesive tape did not show.  I punched a circle in the middle of this and added ribbon as shown

Another piece of white cardstock was cut and folded into 3, on the centre piece I used an oval die large enough that was the card was die cut you were able to see the black and white poppy design

On this centre panel I adhered a piece of red paper, slotted the oval die back into it and die cut another aperture.  I then adhered the two panels.  The stamped image was carefully inserted into this folded topper ensuring the black and white image was at the front and the coloured image behind the first fold.  The recipient will now be able to gently pull the ribbon to reveal coloured poppies! 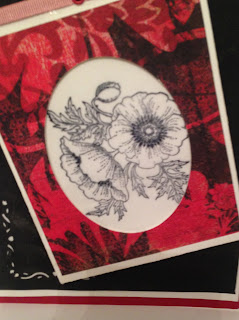 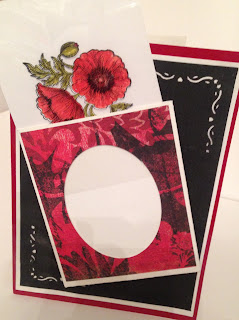 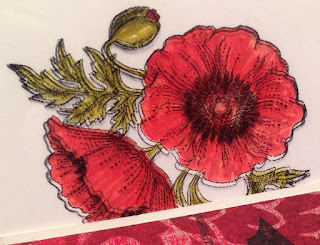