Good morning each and everyone....


These weeks go far too fast, would you agree?  I hadn't realised it was now the Easter break for school children!  I was only saying to hubby this morning that each morning when I awake I really have to think what day it is!  Sometimes I have to give in and ask him haha.  I know that's not a good thing so I'm putting that down to shingles.... shingles could be blamed a lot for the next few weeks/months

So for this week's give-away I've used several different elements 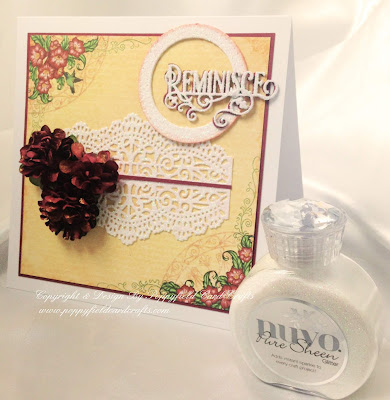 From the Arianna Blooms 12"x12" Paper Pad by Heartfelt Creations, I cut the top panel and adhered it to the burgundy card

The 2 white die cuts in the centre is a die by Crafter's Companion (without a name), once die cut I sprayed adhesive over them then dipped both die cuts into NUVO Pure Sheen Glitter named 'Glitter Diamond'
I cut a slither of burgundy card from my left over piece and adhered it to the centre of the die cuts so that it looked as if it were one piece 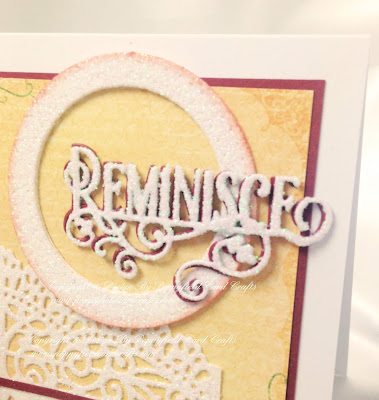 I already had 3 white circles die cut so I adhered these together, sprayed the top one and sprinkled the 'glitter diamond' over it

Next step was to distress the edge a little, I've no idea what colour I used as I picked a blending tool that looked suitable but I've yet to label the details onto it

The 'Reminisce' die cut is from a Tonic Craft Kit, it had already been die cut so I added the same glitter onto it as well 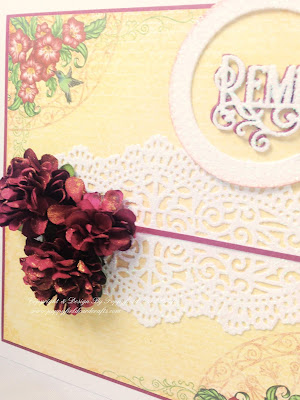 Back to the burgundy card, I die cut the sentiment from this card twice and glued them together.  I then used this as a shadow for the glittered white card and adhered it over the circle

To complete I added a little gold shimmer to the petals of my burgundy flowers, added 3D glue to the undersides and placed them onto the card

We ship internationally, at our own expense, nor does it matter if you have been a previous winner.  I use Random.Name Picker to choose the winner

Tomorrow's blog is scheduled for 9am to correspond with the new challenge at Moving Along With The Times (MAWTT) because of being so ill this is my first contribution this year as a DT member!

Looking forward to seeing you then....