When our grandson was a toddler we would ask him what his favourite colour was, he always said orange, it always made me smile especially as he was only  2-3 years old.  So when I see an abundance of orange I have happy memories and that leads me onto this week's card give-away.  An orange and black twisted easel card.... 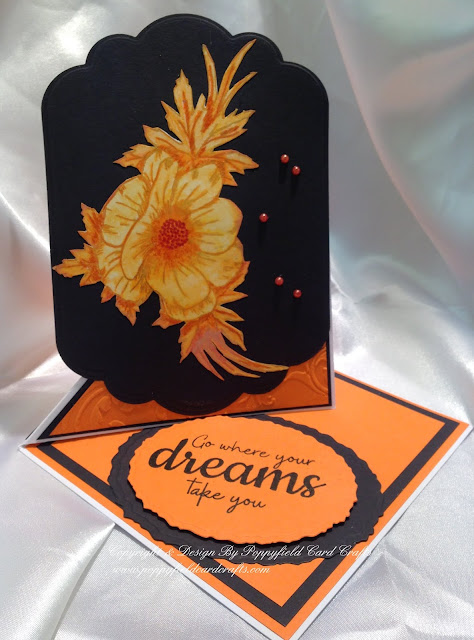 I used a 6"sq white card base and scored the front of the card, diagonally, corner to corner to create the twist

On the inside of the card and cut smaller panels of orange, black and orange.  These were adhered together and glued onto the card

On a piece of orange card I stamped the sentiment and used the next smaller die from the above set to die cut and emboss it.  As this was the main 'stopper' for the easel the orange card had black mounting foam glued to the back prior to placing onto the base 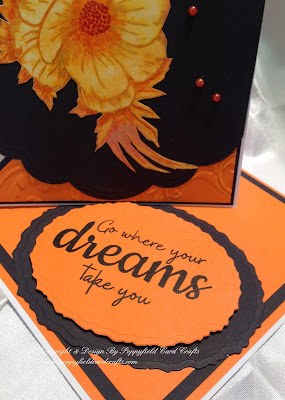 To cover the easel part I used a smaller panel of black card then orange.  I also embossed the orange card.  These were then adhered to the card

On white watercolour card I stamped the flower using a distress oxide ink.  I then used two watercolour pencils to colour the whole image.  For the centre of the flower I used a ProMarker pen to create the seeds

Another unknown Spellbinders's die was used for the black background card, die cut and embossed then once I had fussy cut the image it was adhered it to the black card

As there was more of a gap on the right side of the flower I added a few gems to that side only.  I don't have an orange in 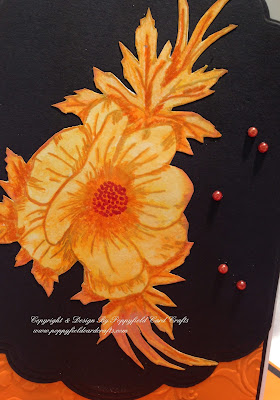 the NUVO Crystal Drops, nor do I have orange gems so I coloured white, flat back pearls using a ProMarker

There is plenty of room to write your message, either behind the easel part of underneath it when you lift it up