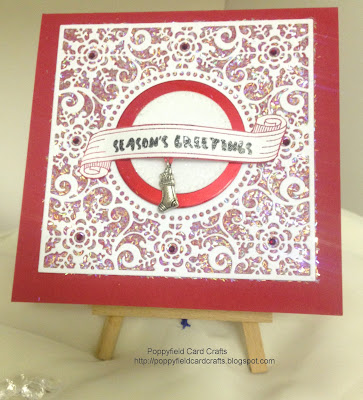 I used a 6" square red card

I also used a new die from a new company (for me) that's  named 'The Art Of Craft. The die was cut and embossed on a  piece of white card.  I cut a piece of double sided adhesive and applied it to the die cut card, on the back.  The backing paper was then removed and I liberally sprinkled Glitter Jewels 'Icicle Sparkles' over the exposed sticky area and burnished them in

The die  also has a circular centre die but I didn't want to remove the centre form this card, instead I die cut a piece of shiny red card with this die,
I then  added a small piece of double sided adhesive onto a piece of white card stock, added the second circular die from my set and die cut it.  It then had the backing paper removed and Glitter Jewels 'Diamond Snow' applied to it.  I glued this to the round red die cut, added mounting foam to the back and adhered it onto the centre of my card

In this set I used the scroll banner and stamped it onto white card using an Archival Ink Pad in crimson.  I then placed and positioned the sentiment, from the same set, and embossed it using a VersaMark Watermark Stamp Pad, I then covered it with a black twinkle embossing powder and heat set it

I then fussy cut out the stamped banner, edged around it with a Promarker 'Berry Red' Pen

To complete I used another stamp from the set, stamped it onto a lightweight white card using an Adirondack Ink Pad in Slate.  I then coloured the image in using several ProMarker Pens.  I used the same sentiment for the verse and this was stamped with an Archival Ink in Crimson.  The envelope was also stamped, front and back, again using one of the stamps from the set