and, as I still, on occasion, grumble about my blog in 2019 I thought I'd leave the second paragraph in haha

But first I'd like to welcome a new follower to my blog,  Pauline/Crafting With Cotnob

I am at my 'wit's end' with the formatting of this blog!! lol  I can honestly say it has a mind of its own.  When I type a post, to how I want it to be shown when published, there are many times when I preview it it has changed the format etc etc!  Yesterday's post was the last example, before publishing it the format was showing how I wanted it to.  Hit the publish button and there's a huge void before any photo or text! grrrrrrrr.  OK, that's my gripe over and onto today's card that one of my sister in laws asked me to make for their friends'  pearl wedding anniversary 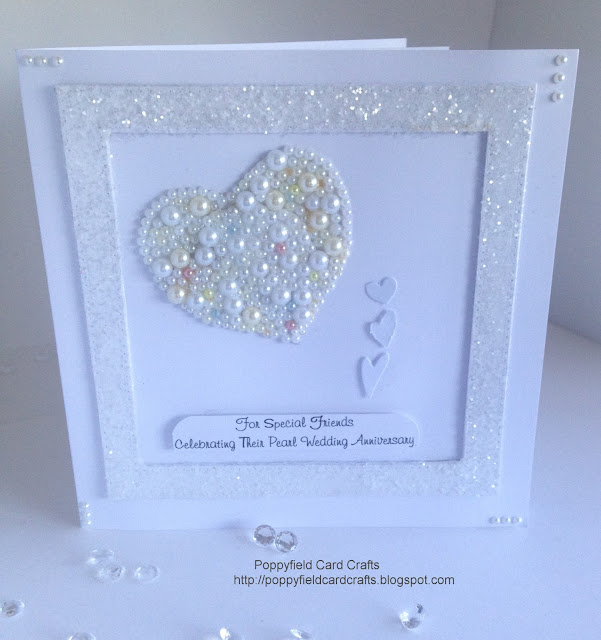 This is an 8" square white on white card.  I actually made a very similar card to this several years ago, that time without the addition of a few coloured pearls, and thought it would be good to make a similar one

I'd forgotten how laborious it was adding each individual pearl to the heart outline, worth it in the long run, in my opinion, but you do tend to get a little 'pearl eyed'.  I spent 4 days adding them and actually it is lovely seeing how it takes shape

Hubby was very good in collecting all the ones that just shoot off the carrier sheet, you crafters know what I mean, they can be found in all sorts of, shall I say, unusual places! lol

With a collection of various sized pearls, and a few coloured ones, I added the pearls to the heart.  I also put a dab of adhesive to the area to ensure the pearls would not come off

Using two of the double pierced squares die set I added a piece of double sided adhesive to white card and die cut a border.  I removed the  backing from the adhesive sheet and sprinkled glitter jewels 'iced snow' over it.  I wanted the border to be raised but not by adding mounting foam so another four borders were die cut, glued together and the glittered border added to them

On the heart shape die I had used there was a residue of  heart shapes and I chose three of them, added glitter jewels diamond snow to only the middle one with mounting foam added to all three.  These, along with the sentiment, were put to one side until I assembled the card

This now brings me to the close of the front of the card, you would think it to be two different cards, it isn't, it was all the pure white as shown above, no filter etc etc had been used (I wouldn't know how to add a filter!) so it is a tad annoying when the images are not clean and crisp, and most importantly, looking as if they all belong to the same card!

For the insert I typed a personal message/verse onto a pale grey marl paper and to add to this, in one of the craft magazines last week, the freebie set was of a wine bottle and glass, so I die cut the glass twice and adhered these to the bottom right of the insert.  I added several tiny pearls for the 'champagne bubbles' then half covered the 'inside' of both glasses with Glossy Accents to give the appearance of liquid


It really is a shame you are not seeing it in its true colour as it is rather a pretty card and, most importantly, my sister in law thought it to be lovely 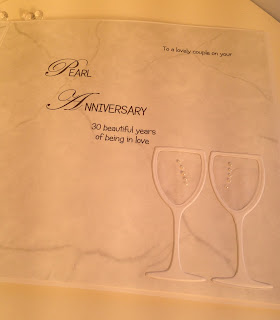